As part of a $764,000 water line replacement project, Lockwood, Andrews & Newnam, Inc. (LAN), the technical advisor for the City of Houston, was tasked with finding a low-impact solution to provide a safe, reliable and long term water line extension; this included a very challenging crossing at Hunting Bayou, one of Houston’s major waterways that meanders through northeast Houston until it reaches Buffalo Bayou at the Houston Ship Channel. 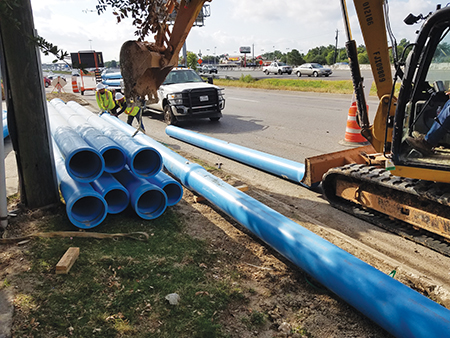 A large diameter prestressed concrete cylinder pipe spanning nearly eight miles along IH-10 has a history of leakage and needed repairs – this large-diameter PCCP was constructed in the late 1960s. For a 3,600-ft section along IH-10 East Freeway between Baca Street and Centerwood Drive, there was no distribution line for local water customers; they were connected directly to the large diameter concrete line needing repairs. A long-term shut down of the large diameter line would likely put these commercial businesses “out of business”.  After evaluating various options to provide the businesses with water, LAN engineers identified the construction of a new 12-inch distribution line that connected to the other existing distribution lines as the best solution to keep the customers in service. A major challenge identified with the installation of the new 12-inch line was a 600-foot-long, 28-foot-deep crossing of Hunting Bayou at the Centerwood Drive intersection.

Given the area’s busy streets and vibrant business community, reducing the project’s impact on the surrounding community was paramount. Components key to the success of the installation, including pipe assembly areas and entry and exit sites, were carefully planned. The west side of the crossing allowed space for the drill rig and entry point setup while the east side allowance was much smaller, lacking enough space to lay out the full pipe string without blocking a major artery and crippling the surrounding community. 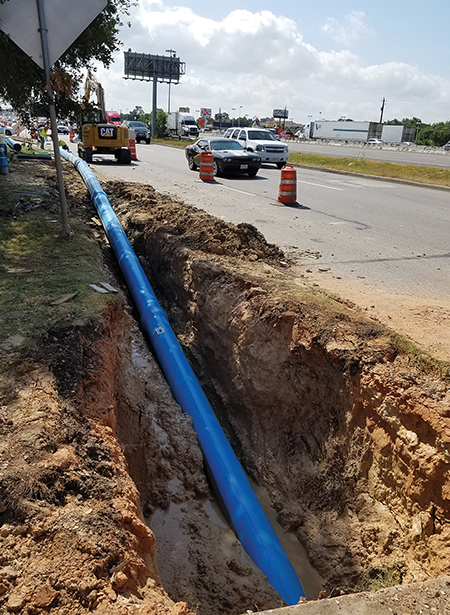 Grava LLC served as the general contractor, with R&A Road Boring, LLC as the driller. The driller used a Vermeer D24x40 Series II Navigator machine. After the pilot hole was drilled, the contractor used a butterfly cutter head. After two reaming passes, the bore hole was ready to receive the pipe.

Certa-Lok C900 RJIB (restrained joint integral bell) manufactured by Westlake Pipe was well-suited for the cartridge-style installation method recommended by LAN. The Certa-Lok restrained joint PVC pipe system can be quickly assembled cartridge style, is ready to go into service immediately, and is not weather-dependent, which are all benefits that can reduce project impact on the surrounding community. Certa-Lok joints can be assembled in less than 1 minute per joint. Additionally, Certa-Lok’s cartridge style assembly engages each joint as the pipe is in motion and works seamlessly with pipe pullback operations.

To begin the pullback process, an initial length of pipe was attached to the puller head and drill stem. As the driller began pulling the pipe in, the contractor engaged each successive Certa-Lok joint one at a time. The pull force experienced during the installation was in the range of 20,000 pounds. These conditions tested the drilling machine close to its capacity, but the pullback process went smoothly and took only one day to assemble, install and tap. The technical team from Westlake Pipe reviewed the bore path geometry to ensure that the pipe bending radius and pullback forces would meet manufacturer’s installation criteria; the bore path crossed other utilities including an existing 42-inch PCCP and an 8-inch gas line.

Managing traffic flow was a challenge with the HDD exit point just behind the curb of the busy frontage road. The cartridge style assembly allowed the contractor to maintain the flow of traffic with a single lane closure. The pipe joint assembly was done in the far right-hand lane, with wood blocks supporting the pipe and a small excavator lifting and moving each joint with a canvas strap. The complete pipe string was successfully pulled in under four hours. As a result, future projects to repair and rehabilitate the existing large-diameter concrete line can proceed without disruptions to water service.

Lockwood, Andrews & Newnam, Inc. (LAN), a national planning, engineering and program management firm, has served as the City of Houston’s technical advisor for its Surface Water Transmission Program for more than three decades.