Faced with boring through wetlands and under a creek to address much needed improvements to its sanitary sewer system, the City of Elmhurst, Illinois, turned to Certa-Lok C900 large diameter restrained-joint PVC pipe and horizontal directional drilling (HDD) to get the job done.

After area homes were plagued with sanitary sewer backups following a severe storm, the Chicago suburb launched the $10 million Southwest Elmhurst Wet Weather Control Facility project. This was not the first time the city had faced stormrelated backflow problems, and the new project aimed to alleviate sewer backups in as many as 2,300 homes in the southwest corner of the city, the area hit hardest by sewer backups.

The initiative included the installation of a deeper, 24-inch gravity sewer line to accommodate higher flow rates delivered to an upgraded lift station, which includes larger pumps, enhanced controls and an expanded wet well. From the station, sewage is currently pumped by way of a 10-inch dry-weather force main to the existing gravity interceptor. A new 18-inch wet-weather force main is also being constructed that zigzags beneath the city toward a new, 2 million gallon storage tank at the city’s Water Reclamation Facility.

The main goal of the city and its engineers was to divert excess sewage generated by extreme weather from entering and overwhelming the Water Reclamation Facility causing sewer backups in area homes. They knew a larger diameter pipe was needed, but also had to contend with the challenges of working in a residential area and boring in difficult ground conditions.

Catherine Morley, PE, senior project manager with RJN Group of Wheaton, Illinois, explained that in order to address the problematic sanitary overflows, the city needed to approach its sewer system in a new way. “Essentially, we redefined the pump station by making it both a dry weather and wet weather station,” she said. “We will still pump the sewage to the interceptor during small rain events via the dry-weather force main, but when that interceptor is overloaded during extreme conditions the addition of the 18-inch force main and the above-ground storage facility will enable the station to pump higher flows without overloading the Water Reclamation Facility and downstream sewers.” 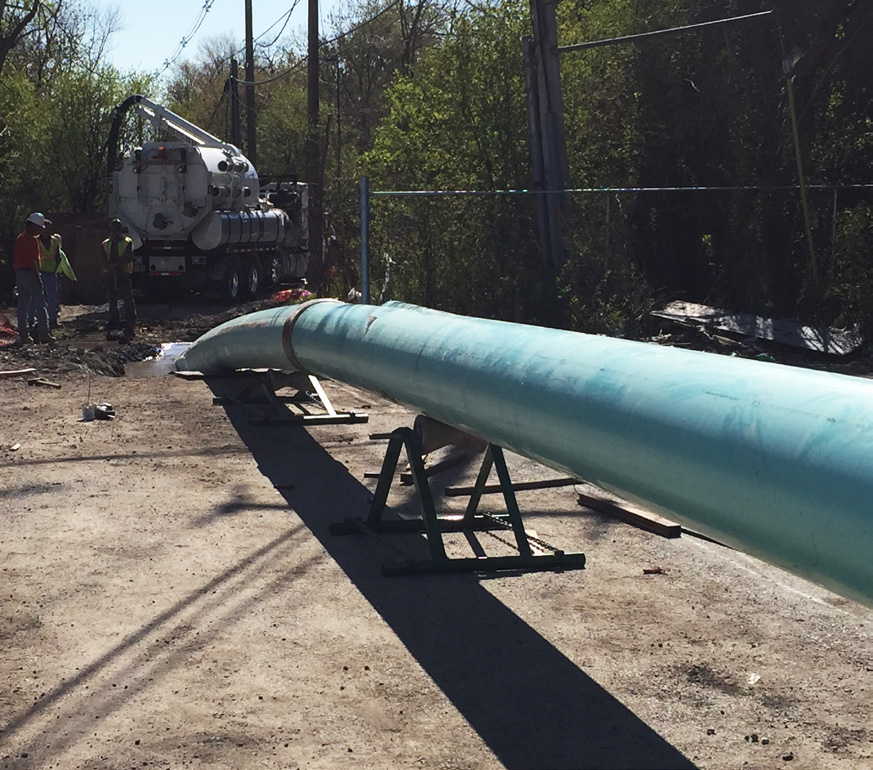 The city needed 5,000 feet of 18-inch force main; however, a good portion of this line would have to run beneath a flood plain, under levees, and cross under a creek and wetlands. For these more sensitive areas, RJN specified nearly 2,000 feet of 18-inch Certa-Lok C900 restrained-joint PVC pipe from Westlake Pipe & Fittings to be installed via horizontal directional drilling.

“We were required to bore through wetlands because the open cut method is not feasible in these areas. Part of the project also required the pipe to go under Salt Creek, and the county required we bore that part of the project as well,” explained Garry Sementa, project manager with Archon Construction Co., Inc., of Addison, Illinois.

Morley said they chose Certa-Lok PVC pipe for its ability to hold up in the unstable ground of the wetlands. The easy-to-assemble restrained joints would also prove useful because the crew had limited space to assemble the pipe while working near the creek. The time-tested 18-inch Certa-Lok pipe was a perfect solution for this project.

This is the first time Elmhurst’s superintendent of water and wastewater distribution Christopher Dufort has worked with Certa-Lok. “It’s been a learning experience for me. Seeing how it works I was pretty amazed at how well it operates and how much force you can use to pull those pipes together with their spline,” he said.

The drills that ran the Certa-Lok force main beneath the berms, the creek and the wetland were undertaken in typical fashion. The creek, however, was a little different. This phase of the project totaled over 1,000 feet. The crew initially installed 165 feet of 30-inch steel casing beneath the creek for protection. To bore the pipe, pits were dug on either side of the creek with the access pit about 800 feet away. During pullback, the crew installed the casing spacers onto the last 170 feet of the Certa-Lok. This work was done while the crew was 15 feet deep in the entry pit with only 40 feet available to prepare the final sections of pipe for insertion into the casing. During this final phase the crew reached 67,500 pounds of pull pressure at times.

“The limited amount of space we had to work on the west side of the creek to get the pipe back to elevation was interesting,” Sementa said. “Certa-Lok’s ability to bend was a huge benefit in this case.” 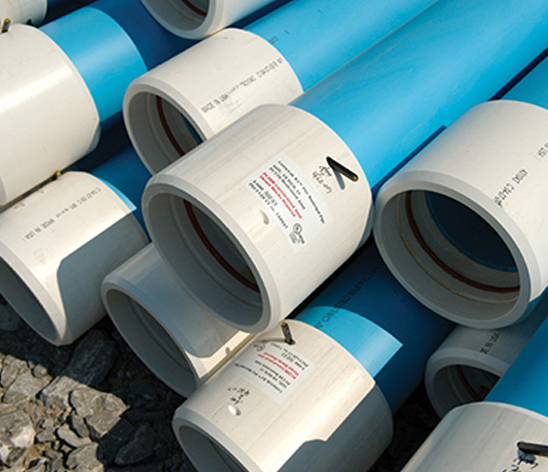