The City of Richmond was tasked with identifying a restrained water main pipe for an open-cut installation that would maintain integrity in unstable soil conditions and also remain unaffected in corrosive soils. 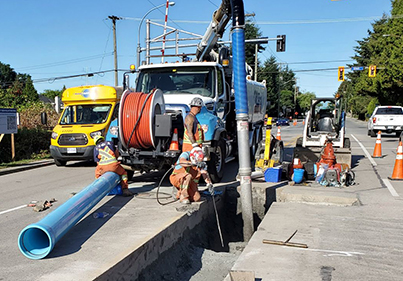 CHALLENGE
The City of Richmond, BC is a coastal city in Western Canada located on the Strait of Georgia where the Fraser River meets the Pacific Ocean. With the population virtually doubling in the last 50 years, now reaching 200,000, the city engineers have identified aging water mains installed in 1971 in need of replacement. Water mainlines in the region require restraints at every joint due to loose ground conditions prone to differential settlement.  For the replacement project, the city also knew the corrosive nature of the soil caused by groundwater chemistry required minimizing the metal present in the ground to extend the effectiveness and longevity of the pipe joint restraint. In previous installations, assembly and wrapping metal restraints at every joint had proven to be time consuming and labour intensive. The City of Richmond was looking for a better performing and more cost-effective solution that would meet the needs of the growing community. 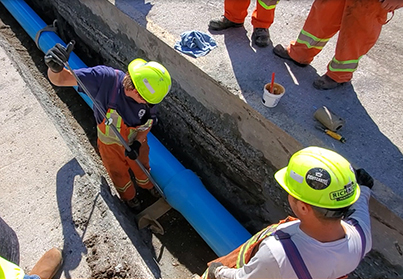 The high-traffic installation areas that run along Bridgeport Road, Simpson Road, and Olafsen Avenue required the city to choose a water main solution that could be installed quickly, minimizing the impact to the area while tying into and crossing a large number of existing utilities. The pipe assembly area needed to be minimized by the city installation team to allow a continued flow of traffic on the street. A segmented pipe solution also allowed for a much smaller footprint than one required by a fusible pipe option that could block entries and require rerouting traffic.

SOLUTION
Certa-Lok® RJIB PVC pipe was installed in the three locations using 6 m (20 ft.) lengths of 300 mm (12 in.) pipe with a minimum design cover of 0.9 m (3 ft.). This depth is standard for the lower mainland area of British Columbia where the ground does not freeze in the winter. Once the new pipe was installed and tested, it was tied into the city water system. The existing water services were then changed over from the old water main to the new line and the old water main was abandoned in place. The pipe assembled very quickly, was physically easier to install for the crew and helped reduce material and labour costs compared to the previous installation with metal restraints required at every joint. The lower bell profile of Certa-Lok RJIB was an added benefit providing additional clearance when crossing existing utilities. 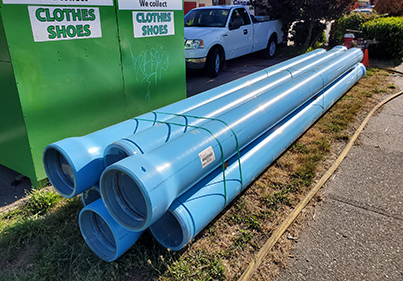 Other considerations when choosing the pipe product were: Certa-Lok PVC pipe is corrosion resistant and, unlike metal piping and joint restraints, won’t rust or corrode over time resulting in the pipe having a significantly longer service life; Certa-Lok also proves a more cost-effective choice in applications where soil is aggressive and can be expected to outlast alternative pipes without the need for protective coatings or liners; and Certa-Lok has a substantial productivity advantage when compared to fusible pipe options.

The Certa-Lok restraint can be assembled in less than one minute per joint and positively improved the installation efficiency vs. the 10-15 minutes required for the metal harness used previously. The project went quickly taking a total of two months with one month for the Certa-Lok RJIB installation and an additional month for the tie-ins and change overs from the existing water main. 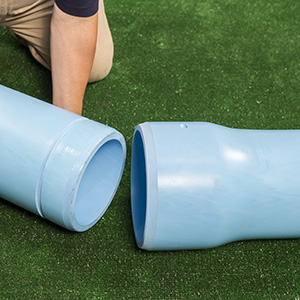