While Mount Rushmore is known for its majestic sculptures of Presidents George Washington, Thomas Jefferson, Abraham Lincoln and Theodore Roosevelt, very few are aware the memorial is staffed by an on-site operations team whose members reside in single-family homes and a small multi-family complex right on the mountain.

Mount Rushmore’s growing on-site staff housing created an increased demand on the memorial’s sewage lines. To address the issue, officials with the Mount Rushmore National Memorial teamed with the Denver engineering and consulting firm Rothberg, Tamburini and Winsor to draw up plans for a new sewage lift station at the base of the 5,700-foot mountain. Plans also included a 3,000-foot-long sewage line to run up the mountain’s steep, rough terrain to connect with another existing lift station.

The pipe specified for the project was three-inch Certa-Lok® Yelomine® by Westlake Pipe & Fittings, a restrained joint PVC pipe ideal for demanding water and sewer, mining, irrigation and trenchless pipeline projects. Yelomine also provided the durability and higher pressure rating required of the project, according to Blaine Foss, utilities supervisor for the Mount Rushmore National Memorial.

“We were running about 90 pounds of static discharge pressure at the pump outlet, so we needed a more durable pipe for the job,” added Bill Huber, project manager for Mainline Contracting, general contractor for the project. “The Yelomine pipe turned out to be a terrific choice.”

Mainline Contracting used a CAT 320B excavator to dig a trench for the PVC pipeline. The crew laid the pipe in the open trench assembling it in 20-foot lengths as they went along.

“We were able to easily assemble the pipe on the ground and lay it in the trench,” says Huber. “That helped the installation run more smoothly.”

A 160-foot portion of the pipeline was installed via trenchless method to minimize traffic disturbance as the pipeline passed under South Dakota Highway 16, better known as Mount Rushmore Road.

Beka Ditching of Rapid City was charged with directional drilling and pipe installation. Its crew created a bore through schist and silty micro clay with a Vermeer directional drill, pulling back 160 feet of eight-inch Yelomine PVC pipe to use as a bore casing. Three-inch pipe was then pulled back through the casing and open trench work continued on the opposite side of the highway. Pipe laying continued until the crew connected with the sewage pump house further up the mountain.

Huber estimated their finishing point, the sewage pump house, was 200 feet higher than their starting point. The highest point the crew reached was 5,000 feet above sea level. He adds the pipe’s spline-locked gasketed joints were critical to maintaining system integrity on such a high-slope application.

“It was basically one continuous grade uphill,” Huber said. “If you averaged it out, it would be about a seven-percent grade.”

Other obstacles included cutting through chunky soil, filled with the mountain’s hard granite, and South Dakota’s wintery weather. Since the crew started late in the year, it was forced to suspend work whenever snowfall was too heavy or temperatures were
too low.

When the sewage grinder pump arrived, all final connections for the new lift station were made. 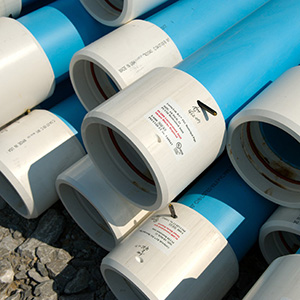