The San Juan Water District in Granite Bay, California, needed an above-ground water delivery solution to support two large temporary drinking water storage tanks. The product selection was crucial for success as the pipe had to withstand environmental exposure and a wide range of temperatures while maintaining the required performance for 2 years. 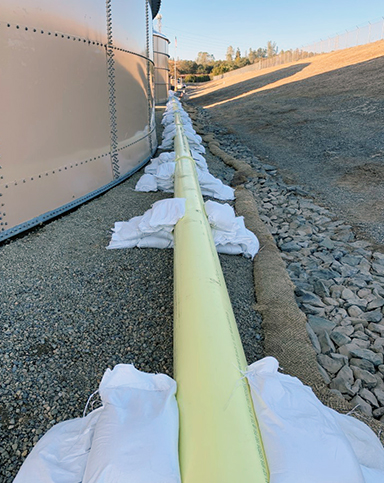 CHALLENGE
A major improvement project underway by the San Juan Water District included the rehabilitation of the Hinkle Reservoir. The reservoir has a surface area of 12.5 acres and provides quality drinking water to more than 265,000 people annually in the Sacramento region. The project required that the 62 million-gallon water reservoir would be out of service for approximately 2 years while they replaced the liner and cover – the liner and reservoir were originally constructed in 1980. To assist with operational control during the project, two large temporary tanks were planned for installation on the District’s property just beyond the main entrance gate. The bolted steel tanks would support water delivery to residents while the reservoir was being serviced. The only suitable location for the large tanks was also over an existing buried 18 in. C905 PVC pipeline, with a depth of cover approximately 5-7 ft. The existing buried pipeline supplies water for drinking and fire service to the City of Folsom, an adjacent residential and commercial area with a population of over 86,000. There was concern that the load of the tanks on top of the existing buried pipeline could damage the pipeline causing a major outage. With the line turned-off and out of service for 2 years, a temporary watermain was needed to ensure a water supply to the residents and businesses while the tanks were in-service. 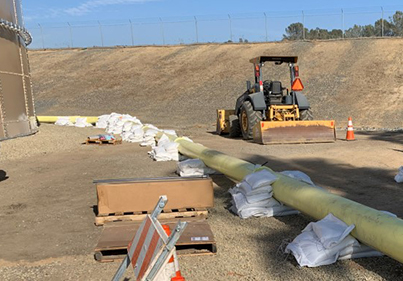 APPLICATION
When it became evident that temporary water tanks were needed to offset storage lost by taking the Hinkle Reservoir out of service for repairs and to alleviate the concerns of a potential outage in case the existing buried pipeline was damaged, the district considered a temporary above-ground bypass pipeline. The new bypass pipe had to meet requirements of the current operating pressure, 50 -70 psi, and accommodate an anticipated delivery of water at 3000 gallons per minute from the new tanks. The San Juan Water District chose 400 ft. of 12 in. D2241/Restrained Joint Certa-Lok® Yelomine® SDR 26 PVC pipe for the above-ground temporary water pipeline. 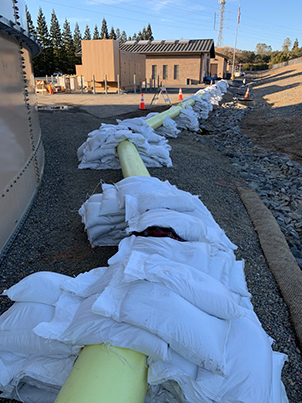 SOLUTION
A four-person crew installed the temporary bypass line a few feet away from the new water tanks. To support the pipe, the district considered multiple options including bare earth, wood blocking and adjustable steel supports on concrete footings, but ultimately chose sandbags placed 6 in. above ground level to keep the pipe in place. The pipe was raised 6 in. to provide a gap between the ground and the bottom of the pipeline allowing for drainage which was directed into a nearby drainage channel. Key criteria for determining support types included cost, stability, and schedule. Since stability had not been an issue, sandbags worked well from a cost and schedule viewpoint. The sandbags are double bagged and UV rated to provide strength and enough durability to last the project duration.

Certa-Lok Yelomine PVC pipe from Westlake Pipe & Fittings was chosen for the project because the pipe is made up of a specially formulated PVC compound that contains impact modifiers and UV inhibitors. These modifiers and inhibitors provide higher impact strength over an extended period of time and the pipe can be used in above-ground, exposed applications. The pipe was installed in 20 ft. lengths and the Certa-Lok Yelomine restraint can be assembled in less than one minute per joint providing for a quick and efficient installation. The Yelomine pipe was installed cartridge style with no extra equipment required. “This line went together in less than a day,” said Mark Hargrove, senior engineer San Juan Water District. “It was very easy to put together.” The 12 in. Yelomine bypass pipeline was then connected to an existing 18 in. pipeline. The water line passed the pressure test for a successful installation. 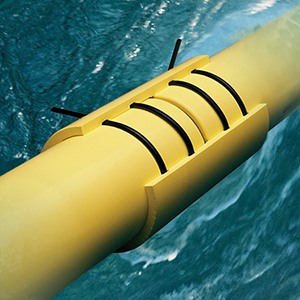