Westlake Values the Communities in Which We Work and Live 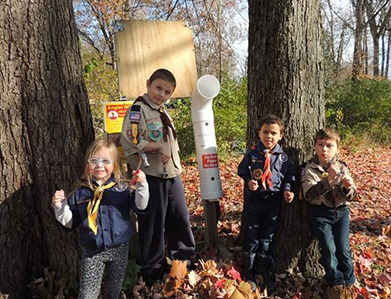 NAPCO’s Shelby Township, Michigan PVC fittings plant recently assisted local Cub Scout Pack 158 for a worthwhile environmental recycling effort in support of our waterways.  The Bear-rank cub scouts elected an adventure program called "the Bear goes fishing”, which includes information about fishing, habitats, regulations, equipment and the need for recycling.   It’s during the discussions they learned discarded monofilament fishing line can be harmful and life threatening to marine and freshwater wildlife. This spurred the group to take on the project of building PVC waste receptacles for discarded fishing line that could then be collect for recycling.

The scouts contacted the local Shelby Township Parks and Recreation about the project and they immediately identified five locations where people are fishing and the tubes could be installed, two at Clinton River and three at Heritage Garden.  These locations had existing in-ground post where the tubes could be attached. The scouts mounted the PVC tubes and will check them every 6 months, the PVC threaded plug at the base can easily be removed providing access to the discarded monofilament line from the bottom.  The tangled monofilament collected will be sent to Berkeley Conservation for recycling. Since 1990, the Berkley Conservation Institute has recycled more than 9 million miles of fishing line. The recycling program is sponsored by the BoatUS Foundation, with funding from the NOAA Marine Debris program and the National Fish and Wildlife Foundation, and provides free stickers and signage plus video instructions on how to make the PVC receptacle.